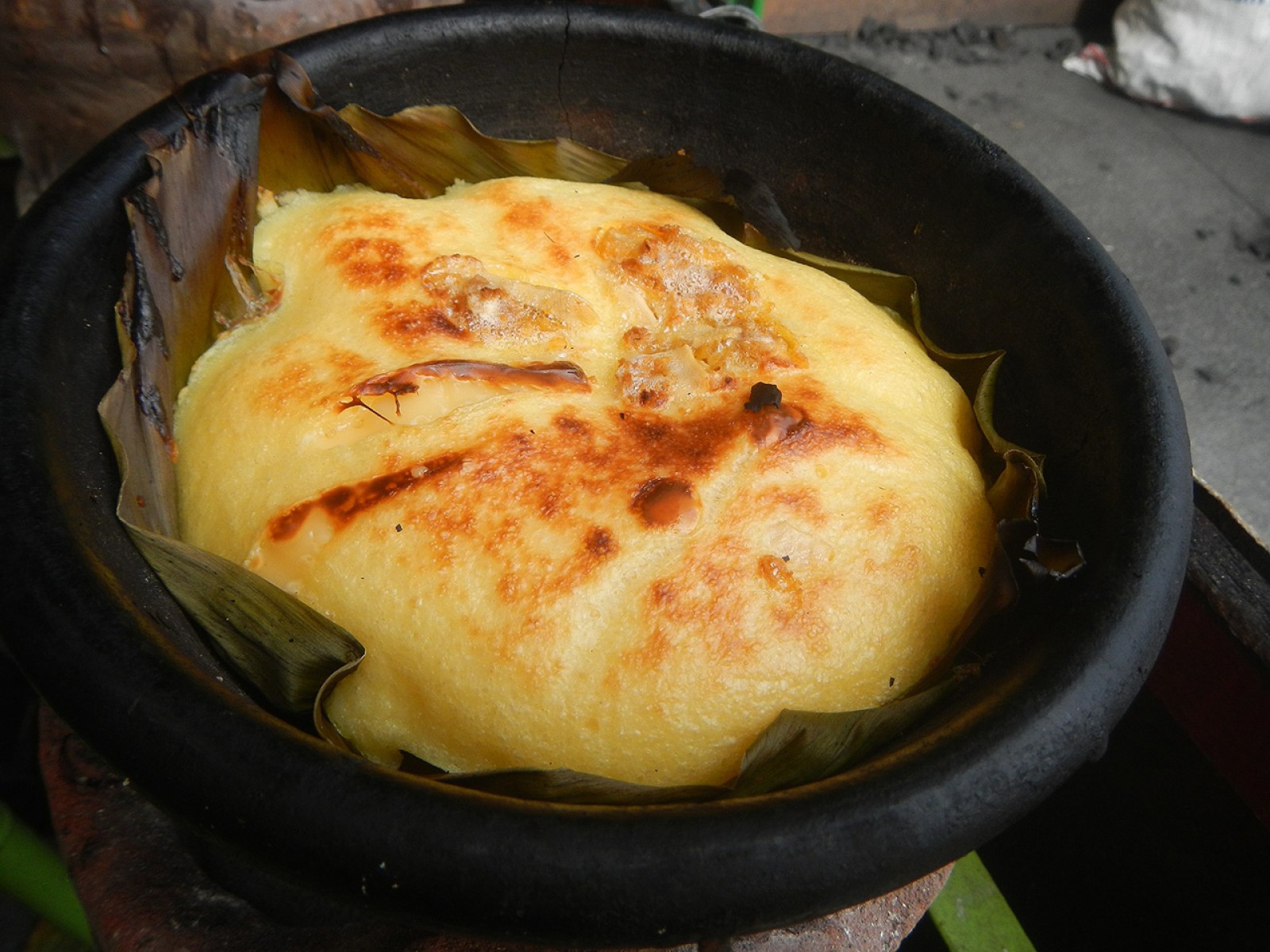 The Many Faces of Bibingka

Aside from bedecking houses with colorful parol lanterns, ushering in the Christmas season for Filipinos is best done by consuming traditional holiday fare.

The bibingka sold in stalls set up right outside churches, or more conveniently in kiosks at malls, is a round, yellowish rice cake with a semi-charred top laden with white cheese, salted eggs, butter, and sugar. Sometimes queso de bola slices make an appearance, and usually, it comes with a side of grated coconut. It is cooked in a specific clay oven with receptacles for lit charcoal below and above the cake; banana leaves are used as liners.

The more traditional version of bibingka was denser compared to the fluffier ones popular these days. Previously, the bibingka mixture was fermented to improve its flavor and release its natural leaveners. More modern recipes add fresh eggs, butter, milk, or baking powder to improve its texture.

The history of bibingka, especially its association with Christmas celebrations, is many and varied. Some attribute the practice to early Filipinos offering rice cakes to deities, which was eventually carried on to Christian customs. When the Spanish friars introduced Simbang Gabi—nine days of dawn novena masses before Christmas—farmers relied on heavy rice cakes like bibingka for their post-worship breakfast to fuel them for the day’s work.

Historian and writer E. Arsenio Manuel also noted that bibingka may have Chinese roots and its name might have been derived from the Hokkien root word “bi,” which means uncooked rice. This is the same origin for some Filipino kitchen items like bihon (noodles), bilo-bilo (glutinous rice balls), and biko (another rice cake).

Many have also pointed out the bibingka’s similarity to the Indian bebinca. Recognized as the Queen of Goan Desserts, bebinca, also bibik or bebinka, is a layered cake with Portuguese origins. It is also very popular around Christmastime, features coconut milk heavily, and uses both top and bottom heat for cooking. But, unlike the bibingka, it uses flour instead of rice, is composed of multiple layers (ranging from 7 to 16) like the Filipino sapin-sapin, and has nutmeg or almonds as topping. While some acknowledge the similarities, some also argue that the term may have been introduced to Goa by the Portuguese from the Philippines, instead of the other way around.

Within Southeast Asia, there are also variations of the bibingka. A bibingka similar to the Filipino kind can be found in Indonesia. It also uses rice flour and coconut milk and finds shredded coconut inside as filling. Their different islands change up the cake by adding jackfruit, meat floss, pineapple, and ube as filling or topping. Wingko, also wiwingka or bibika, is a pancake version of bibingka popular throughout the island of Java. In Malaysia, kuih bengka is a yellowish sweet cake made of cassava and coconut milk. The traditional dessert is also cooked using charcoal.

But nowhere else in the world can you find as many variations of bibingka as in the Philippines. The popular bibingka described at the beginning is commonly identified as bibingka galapong. Galapong is dough made out of fermented rice. Just as famous is bibingka malagkit, a cake also made of glutinous rice and coconut milk but prepared so that the rice grains are still distinguishable and served as square slices.

Bibingka made with cassava instead of rice is called bibingkang kamoteng kahoy, while bibingka baked in a coconut shell is called sinukat. Bibingka royal from Ilocos is topped with melted grated cheese. Bibingkang monggo from Malolos, Bulacan features mung beans, while the bibingkang nasi from Pampanga requires cooking in a molding pan.

Pateros and Pasig came up with bibingkang abnoy or mabantot, which features rotten duck eggs and black pepper. Binakayan, Cavite has the bibingka balinghoy strewn with nata de coco, kaong, and langka. Also from Cavite are bibingka samala, which is similar to bibingka malagkit, and bibingkoy, made of mung bean-filled rice dumplings in a coconut cream sauce.

The Balasan bibingka is another popular variety from Northern Panay island, especially in Iloilo. This bibingka is white, soft, and creamy; it is denser and flatter than bibingka galapong, and is filled with strips of coconut meat. Another Ilonggo variety is the bingka sa mohon, which is baked in ovens. From Negros Oriental, bibingka kabog is made out of millet instead of rice.

Cebu has bingka pinalutaw, which is similar to puto and cooked by steaming or boiling. They also have the pancake-like bibingkang Mandaue, which features tuba or palm wine. In Eastern Samar, the same type of bibingka is called salukara, which is cooked in pans with pork lard. Mindanao is represented by Davao del Sur’s bibingka buko or bibingka a la Digos, which features shredded coconut tucked inside the cake.